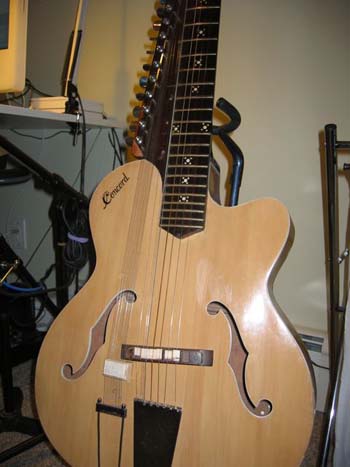 I have first touched piano when I was 10 and guitar when I was 14. At 25 I played in few bands: Funk, jazz duo guitar, reggae & underground. Then I disappeared from the scene for over 10 years. I lived in India. I have reappeared with new instrument, custom made in Kolkata, West Bengal. I call it veenar since it is a combination of guitar and south indian veena. The tuning is: E1, B1, E, B (sa, pa, SA, PA) . The total number of strings is 21 (4 main, 4 rhythmic and 13 sympathetic).

This eclectic instrument inspires eclectic music. Some of my pieces sound classical, some jazzy, oriental, eastern indian, some may have rock elements. Maybe you can find something else there. If you do please let me know. 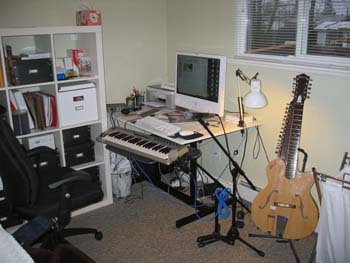 This instrument is the combination of indian veena and western guitar.

The 2012 model has 26 strings: 5 main, 5 rhythmic and 16 sympathetic. It is aloud even without strumming. Sound is reach and sounds beautiful more it is played.

The 1996 model has 21 strings: 4 main, 4 rhythmic and 13 sympathetic. At its present stage of development its tuning is like in veena (E1, B1, E, B) and sounds like guitar with reverb when you play high. These main 4 strings are spaced widely then normal guitar strings. Fred board is wider too, in order to facilitate finger picking as well as bending outward, not like on regular guitars - inward the finger board. These allows to bend the string leaving the other un-muted. It is definitely not the loudest instrument but beautiful.

It can play complete music and does not need accompaniment. On lower notes it sounds a little like sitar with chorus effect on in.

Although it is designed to play indian raags it can be used to play western music even with interesting 4, 5+, 6, 7+,9, 11 and 13 chords. First and fifth notes are fixed in Indian music. So, whatever you add to it creates a chord.

Currently I play my own style with my own technique without using a pick. To get full effect you should plug strings with short finger nails of thumb, index and middle finger. I would not recommend using pick as you will loose control over the simultaneous playing on all strings.